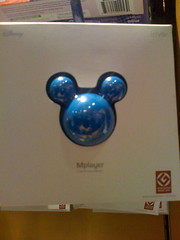 
I was in the Orlando Airport, coming back from vacation, and this caught my eye- a molded mp3 player in the shape of Mickey’s head by the folks at iriver, known for the ultraportable flash players beloved by podcasters everywhere. You can see all the specs on this player at the iriver site at http://www.iriver.com/product/p_detail.asp?pidx=86.

I think this is brilliant marketing, but it also tells me something else:

-Disney has adopted mp3’s podcasting and new media in general in a big way. You can now get all sorts of consumer electronics , from mp3 players, flash drives and cameras, not to mention TV’s, phones and dvd players-branded with their recent hit of the moment- Hannah Montana, Pirates of the Carribean, or High School Musical.

– Disney is branding the whole concept of videopodcasting by integrating it into their shows on the Disney Channel- iCarly, and episodes of shows like Suite Life with Zack & Cody.

– If this Grand Dame of Fortune 500 companies is heavily investing into portable media, it is surely not the only one out there willing to do so.

It’s time for bloggers, podcasters, video producers and the like to stop feeling like they are cutting edge. Content from the internet is going to be even more mainstream- and it’s not just because Oprah had a “Best of YouTube” episode, but it is a harbinger that all of this new media stuff is no longer fringe.

This means we also have to take responsibility for getting the word out about our content, and keep in mind that with the Big Boys in the marketplace, quality will count over quantity. This means we’re back to Content is King, and that poor quality production values will likely have a harder time finding a bigger market than ever before.

What do you think? Is New Media now mainstream at last?