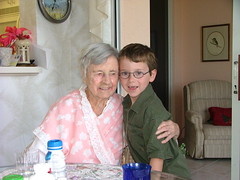 This morning I got a phone call that my grandmother passed away.

She was in her mid 90’s, and had a good long run, that’s for sure. While the end itself came rather quickly and unexpectedly, she had not been in great health for many years. When I saw her this summer, she was actually looking better than she did when this picture was taken.

Grandma Nina was scottish, and bit of the more formal grandmotherly type than the playful kind, and that was fine. Each of the Grandchildren got a special visit alone with her when we were 10- being the oldest grandchild, I got to go first, and I always remember feeling very grown up, taking a plane by myself to go visit her in Florida, which seemed like a very exotic place compared to growing up in Rochester, NY.

Nina was married three times, and her last husband passed away a few years ago. Papa Dick and she had many good years together- they traveled the world and led the kind of retirement I think most people dream of- exotic vacations to China, Australia and beyond, wintering in Florida and spending summers in Connecticut.

When I lived in Gainesville, I used to go down and visit her for the weekend from time to time. One of these times, Papa Dick became ill and we had to take him to the hospital. While in the Emergency Room, Nina turned to me and said “I have got to stop marrying these old men” in a very deadpan, remind-me-not-to-do-this-again sort of way, that I’ll never forget. It was like Mary Poppins all of a sudden going off book. Vaguely shocking and hilarious all at the same time.

Nina lived in Palm Beach in a golfing community where Greg Norman and Jack Nicklaus also lived. I’ll always remember her seeing Greg Norman at the club and remarking he needed a haircut, or Papa Dick almost running Jack Nicklaus over in the Cadillac as he was trying to get his mail. Weird things to remember, but these are the funny, quirky moments that stand out.

My kids knew their great Grandma, but didn’t get to see her very much, as she was definitely in poor health for most of their lives. John remembers spending time with her and was very impressed that she is a true descendant of Mary Queen of Scots and likes to think of himself as a prince of Scotland, however far fetched that is in reality.