Outside Philadelphia, a lawyer named Whitney Hoffman is wrestling with her résumé. She barely worked a full year as a lawyer after graduating from Penn State 14 years ago, taking what she calls a “mom sabbatical” to raise her sons, who are now 10 and 13. Not that she sat around eating bonbons during those years. She researched a book on public-assembly-facility law being written by a local attorney, served on the board of a local public-­service organization, helped run the community education program for her son’s school, created a biweekly podcast on learning disabilities and organized a number of conferences, called PodCamp, to teach new-media skills. “It’s not that I don’t have experience,” she says, “but I worry that I’ll sit across the desk at an interview, and they’ll say, ‘What are you experienced for?’ ”

Now let’s move 100 miles north, to Manhattan, where another lawyer, somewhat older and decidedly wealthier, has also been looking to land a new job. A graduate of Columbia Law School, she never really practiced, either but wrote a number of books, on privacy law and the Constitution. She has served on boards — those of the Commission on Presidential Debates, the N.A.A.C.P. Legal Defense and Educational Fund and the John F. Kennedy Library Foundation ­— where those who worked with her agree that she was hands-on and not just window decoration. And she helped turn around fund-raising for New York City’s schools, raising $70 million for cutting-edge programs. She did all this while also being on “mom sabbatical” to raise her three children.

Whatever her political future, Caroline Kennedy is opting in, and as a result, she faces a magnified version of the eyebrows raised whenever women try to return (or, in her far more unusual case, to first enter) the paid work force full time. Take away the part about her father the president and her uncles the senators, ignore for the moment her Park Avenue address, peel away the talk of the dangers of dynasty and the power of privilege, don’t even touch the question of whether anyone would be picking apart her credentials if it were a male Kennedy who was under consideration — and what is at the core of all this shouting is what, nowadays, counts as experience.

It is a pivotal question in the evolving world of white-collar work. In the past, you would start at Point A — the mailroom, the associate level, the boss’s assistant — keep your head down and your nose to the grindstone and make your way toward Point B, putting in hours and getting your ticket punched along the way. A few people jumped the line because of luck or connections. (Those who aspire to serve in Congress sometimes “pay their dues” by playing for the N.B.A. or the N.F.L. or starring on “The Love Boat,” which are all less relevant qualifications for the job than financing city schools.) But there was a recognized path, a defined progression, a road map from here to there.

Recent decades have scrambled all that. The rise of the dot-coms threw waiting your turn and linear résumés out the window. With so many successful start-ups being hatched in garages, the zigs, zags and gaps that were once the kiss of death on a résumé became badges of honor. There was a little less emphasis on what you’d done and a bit more focus on what you could do. Experience became a kaleidoscope rather than a straight line.

At the same time, women changed the culture of the workplace, not least when highly visible women began to leave it. The rhythm of office work — its hours, its demands, its life cycle — is designed for a man, ideally a man with a wife back home with the kids. Ever since the industrial age, career tracks have been built on the assumption that you can work around the clock in your 20s, shoulder increasing responsibility in your 30s and 40s and begin to ratchet down and move over for the next generation in your 50s and 60s.

That doesn’t work for many women, who are apt to want to pause, physically and emotionally, for children, maybe slow down in their 30s, when men are charging ahead, and come back with a new energy in their 50s, when men are slowing down. Someday, perhaps, work will become more a lattice than a ladder — a path that allows for moving up, stepping down a notch or two, taking a few large sideways strides, making your way upward but not necessarily at a sprint. That is the image proposed by Cathy Benko in her 2007 book, “Mass Career Customization,” and it is working, with some kinks, at Deloitte, the consulting and auditing firm, where she is vice chairwoman and chief talent officer.

But this vision works only if experience — we’re back to that word again — is redefined. If what you do, and think, and produce, and change all count — even if none of your activities take place in an office, where you enjoy a title and a salary. Hillary Clinton made that argument when she ran for the Senate. Voters agreed that a multifaceted life filled with experiences, if not experience, made her ready to serve. Barack Obama presented a version of that argument as well. His was hardly the traditional résumé of a presidential candidate, but his potential employers (the voters) gave him credit for a fierce intelligence and lessons learned from life.

None of this is to say that Caroline Kennedy deserves to be senator, or that she wouldn’t be better off being elected to the post rather than appointed to it. It doesn’t mean that Whitney Hoffman automatically deserves a job, either. But let’s stop with this talk of inexperience when we mean a range of experiences, many shaped by motherhood. The only way work will become more flexible for everyone, for all of us, is if the untraditional begins to count. Kennedys may not need that. But the rest of us certainly do.

Lisa Belkin tackles everything parenting-related and invites you to join the conversation. 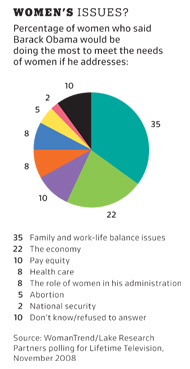