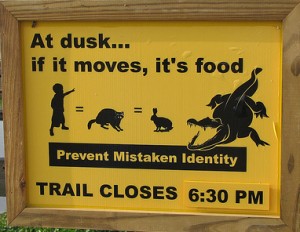 This post is a bit unusual, but it gives me a chance to tell some fun stories from my days in Florida, so come for a walk with me down memory lane.

My friend, CC Chapman, in working with the folks at CMT to promote their new show, Gator 911. Normally, as someone who lives in the northeast, I might assume a show about wrangling alligators seems far fetched or weird.  But I spent several years living in Gainesville, FL and stray alligators were part of my experience there.

We were on a back-stage tour of Disney at one point, and the guide told a story of tourists from New York freaking out and insisting there was a baby alligator in their hotel room.  This is something that seems far-fetched, but in Florida, it is not out of the realm of possibility, so they went to check it out.  It tuned out it was a harmless gecko, a three inch little lizard, more common that squirrels in Florida- almost as common as robins are in my backyard.

People from other parts of the Country have heard of alligators in the wild, but we’ve never really had that experience, but in Florida, Man vs. Wild is a common, every day sideshow to life.  Whether it’s driving across Alligator Alley and seeing pythons, large snakes and gators by the side of the road, finding small bats and frogs nestled into the folds of the patio umbrellas, seeing small dogs barking at lizards, or not hanging out near murky bodies of water near dusk- you learn to respect the wildlife in Florida quickly.  Heck, the palmetto bugs are so big, I swear they can rearrange your furniture at night if you’re not careful. In our first place in Gainesville, I, the naive yankee, put out “roach baits” to keep the palmetto bugs under control- all it did was make them inebriated and slow down and hang out in the middle of the kitchen floor.  (We quickly switched to professional pest control- a necessity down south.)

Gainesville, best known for the University of Florida, is a small town in Northern Florida, striking you as part of the old South more than Florida cities like Orlando, Miami, Tampa, or Jacksonville, which seem like cities you might find anywhere else in the country, beyond the prevalence of rum drinks and hearing lots of Jimmy Buffett songs wherever you go.  Gainesville sits in the Florida Aquifer and is surronded by beautiful natural springs, and a rather large swamp called Payne’s Prairie.  Alligators abound in the area, taking up home in many of the small ponds and lakes.  It’s really not uncommon for people to find an alligator in their backyard if they live near a pond, or even in their swimming pool.  A few times a year, you’ll hear stories about usually a dog or a small child being attacked or eaten by an alligator.  To those of us in the Northeast, this sounds more like something we’d see in a cartoon than something real.  The whole concept of wrestling an alligator or dealing with what seems like a modern dinosaur can seem absurd, especially since wild reptiles and amphibians beyond a snapping turtle are simply foreign to most people’s experience.

My all time favorite alligator story has two parts.  We represented a local apartment complex that had several nice ponds on the property.  The manager had the employees go around and hunt eggs laid arond the property by the large local muscovy duck population, because the eggs and baby ducks helped invite alligators to take up residence in the ponds.  But even with these attempts to discourage alligators, sometimes, after a big rain, an alligator would decide the small ponds on the property seemed like a great new home.  One day, a new alligator showed up, and Susan called the Department of Natural Resources to come and get the alligator out of the pond, because it clearly posed a threat to the residents. She called me as well, knowing this was something to see- as the guys came to catch and cart the alligator back to the swamp for release.

By the time I got there, the guys were almost finished.  The gator was caught, and they were in the process of restraining the 6 ft +  long animal – it was simply an amazing sight.  This big, wild, creature was amazing up close.  I had seen plenty of Gators by this point, but always at a safe and respectful distance.  This was much closer, and it was a kind of freaky, prehistoric, fight or flight feel- like at any moment,the Gator could be come Godzilla and eat us.  You have to respect an animal that’s as big as you are, with sharp teeth and an aggressive nature, clearly not thrilled about being carted back to the swamp from his comfy new home.

Gators have all their power in the snap- you can actually keep a gator’s mouth shut with one hand, but if his mouth is open, he’s extremely dangerous.  The amazing, strapping guys from the Department of National Resources had just wrapped the Gator’s mouth shut with duct tape, and were using the same to restrain the gator’s  arms/feet.  He looked like he was in handcuffs, being led off to Gator Jail.  It was one of those experiences that left an indelible impression on me. 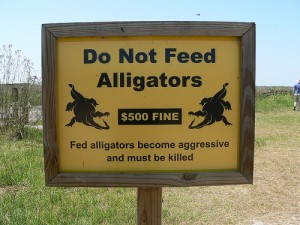 I’m really excited to watch Gator 911.  It’s filmed in Texas, not Florida, but the issues they deal with are just the same ones we dealt with in Gainesville.  It’ll bring back all those memories of gators, and how really amazing the guys are who deal with these creatures every day.  It’s a different world down south, and while those of us who live up north and expect our bugs and wild creatures to be afraid of us, and the biggest problems we deal with are raccoons in the garbage or mice in the garage, we know nothing about reptiles and what it’s like to be confronted by something that could eat you.   And it’s not animatronics at Disney either- it is Man versus Wild and I’m looking forward to tuning in.  It debuts this Friday at 9pm on CMT and I know I’ll be setting my DVR accordingly.