What’s Off The Table? 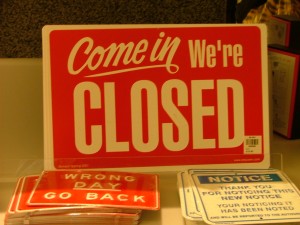 Yesterday, I was leaving an event at a local community college.  On my way out, two students were also heading out, presumably after class.  One was older, clearly a continuing education student, the other younger.  I heard the older student say “It sounds good, but I’m not sure I’d want to commute all the way to ______(insert name of town here) for a job in a law office.”  Her friend remarked, after a sigh, “Well, maybe you can find something closer to here…” in a voice that seemed trying to provide reassurance and indicate doubt at the same time.

This caught my attention because it seemed like the older student was limiting their options from the start.  Certain things they would or would not do in order to get a job- they were taking options off the table even before they were possibilities.  It got me thinking- how many times do we limit ourselves because we take options off the table even before they are considerations?  How many times do we start with a net that’s way too small and unlikely to catch something, when spreading a wider net in the first instance would be much more likely to be successful?

In a tight economy, I’ve seen people wait out their unemployment, because it provides enough money to get by, but almost too much in that it doesn’t create a sense of urgency about finding a new position.  I’ve seen other folks refuse to apply for any job that has a salary less than what they were making, even though they would be more likely to return to the workplace faster if they adjusted their expectations.  Eventually, because these folks have voluntarily limited their options in what positions they’re willing to pursue in advance, they can end up in a tight situation where unemployment is going to run out, no attractive jobs seem to be forthcoming and competition for the ones out there is even more competitive than before, and now, a crisis looms where becoming “flexible” or doing whatever it takes to make ends meet, including piecing together part time work, is the only option left.  They have run out of runway, run out of choices, and their options are seriously less attractive than ever before.  All because they took many things off the table before they even became serious considerations.

When you already are employed, or have a great position, you can afford to be choosy.  In order to change your current position, change jobs, move, or the like, the new thing has to be at least as good or better than your current gig.  What constitues better varies, and it’s not only money.  Sometimes it’s a new adventure.  It may be a new challenge, that might even pay less.  It may be having more autonomy and self-control.  It may be making an investment in your outside life as well as your work life, choosing a new community or location where you will thrive and feel more at home.  But in the analysis, once you are already happy and secure, it’s going to take some pretty significant upside benefits to get you to make a switch.  It’s less about limiting your options and possibilities as it is comparing your current situation to something new and all that it might offer.

When you are in a crisis situation, taking options off the table may be the worst thing you can do.  You have to be willing to consider every option, even the ones you hate- moving, downsizing, bankruptcy, doing something other than your dream job, taking a risk on a whole new direction, having a long commute- you are in a situation that my mom always referred to as “Beggars can’t be choosers” and you have to take what you can get.

If you wait too long to consider the outlying options- if you take too much off the table and don’t consider everything that’s possible, you may no longer have the luxury of having any choice at all.

I hope this lady ends up with a job she wants in a location that works for her, I truly do.  But in searching for the “best” options locally, she might miss out on a better opportunity that could be inconvenient, but might also have hidden benefits she never considered.  But she’ll never know, because that option is already off the table.

(Note: Additionally, your attitude about how much you want a job and how much you are willing to invest in it, is often visible in your attitude and demeanor.  So please approach all your customers, potential employers and people you deal with in a way that says “I care and I want to do my best.”  That’s what makes Human Business succeed.)