Why The SuperBowl Half Time is the World’s Toughest Gig 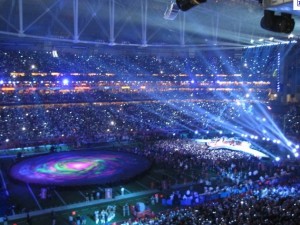 The SuperBowl half-time show is the world’s toughest gig.  It’s a huge audience to play to, but because of the size and diversity, it has to meet the following metrics:

1. Visually engaging, both to those in the stadium and to the world-wide TV audience

3. Produced to the point of being over-produced

4. Generic and family friendly enough to satisfy the NFL’s corporate sponsors, family image and more, yet

5. Edgy and interesting enough to get talked about, since everyone is going to have something to say about it.

It’s a very difficult equation to get right, no matter who the entertainers themselves are.  Add that the whole show has to be set up in 5 minutes, and taken down in about the same time to prevent any stalls in the game itself, and you have a logistics nightmare for everyone involved.

And having worked at the SuperBowl as part of the Disabilities Services team for 8 years, I’ve seen what goes into these things.  The movement of people, stage set ups, special effects and the like, all live- even with a week or so of rehearsals, crammed in between actual team practices on the field is just crazy.  And all you need is one guy to fail to hit a mike button, and you’ve got a problem, Houston.

I’m not sure what everyone expects from the Half Time show other than “Bigger!!! Better!!” each year.  When Disney did the show, it was deemed too family friendly and bland; when MTV did the show, we got the Janet Jackson fiasco.  Keeping it lively, exciting, and family friendly may be a bit of an oxymoron in and of itself.

Short of coming and throttling you in your own living room, What do you want from the Half time show? What do you expect?

I just don’t see how any half-time show will ever truly satisfy the public.  Every year I’m always impressed because of the amazing feat they have to pull off behind the scenes to make this thing work, In the middle of the world’s biggest and most crowded Football Game ever, with many of the field performers being local folks, volunteers, and not professionals hired for the occasion.

This is not a broadway show, or a regular concert performance.  It’s a five minute ground-up performance that lasts about 15 minutes and then has to be torn down again.  And it’s gotta please all those folks in the stands, as well as the people watching from home.  It has to take place in the round.

It’s the toughest and most thankless, unforgiving gig in show business.  This biggest question of all is: Who will be brave enough to enter the lion’s den next year?