Social Media and The Picture of Dorian Gray 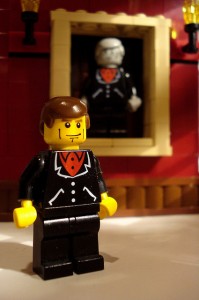 The one thing I’ve discovered after working in and around social media for nearly six years is that the image presented is not always all that it seems.

If you look through the headlines, there are numerous accounts of folks getting into trouble because maintaining the exterior version of themselves, their real life avatars of who they want to be, does not match up with who they feel like inside their heads, when no one is watching.  And it happens in social media all the time, when we perceive one thing about someone, but it may just be a small snapshot of what’s really happening in their lives outside of Facebook and Twitter.

In real life, the difference between perception and reality catches people up every day. People regularly overspend to try to portray themselves as successful, even if their bank accounts are empty.    They take on jobs they know they can’t handle.  My favorite joke on this is  that “The ego is writing checks the body can’t possibly cash.”

I’m guilty of doing this from time to time.  I want to do 20 things but only have time for four, and so I have to choose.  But choosing is hard, so I take on more than I can handle, causing myself stress and panic.  And I do it more often than I’d like to admit in public, but I bet you do this too.

It’s that old power of magical thinking, where you tell yourself “I’ll get everywhere on time, as long as the traffic gods cooperate”  which, by the way, they almost never do, especially when you are in a hurry.  Yet, despite all of our experiences that tell us to leave a bit early, to compensate for poor GPS directions, or bad weather or whatever, we still end up making mistakes we could have avoided because our egos get in the way of our analytical, common sense.

As stories of people “biting off more than they can chew” fill the headlines, I’m reminded of that old summer enforced reading classic, the Picture of Dorian Gray. The external picture we get of people’s lives is that they are somehow blessed  and privileged in a way we can only imagine. In the meantime, getting to this place of perceived success was not always easy or pretty, and maintaining your place on the top is even more difficult.  As much as the public loves success, it also loves Schadenfreude, the perverse joy we get when we see the mighty and famous are just real people and make silly mistakes, just like the rest of us.  We can’t wait to see that underneath the perfect exterior, lies a grizzled portrait in their attic, like the Picture of Dorian Gray, where the summation of their vice and sin is paid for, convincing us yet again that Karma is a bitch and there is somehow divine justice in the Universe.

I often wonder how the US became the Schadenfreude capital of the world.  I like to think it started back when TV shows like Dallas and Lifestyles of the Rich and Famous made it to TV, giving everyone a view of a world very few ever enjoy, and making it seem like this was a commonplace and normal thing we should all aspire to. The world of aspirational thinking got an adrenaline shot in the arm, and its current day successors, ranging from Housewives of (name your ritzy suburb here) to MTV Cribs to the Kardashians, to even the more modest and achievable Martha Stewart continue to set standards beyond the means of the majority of folks out there who live modest lives.

It used to be that you would have to do something to be successful and earn the ridiculously expensive and lavish things in life.  “Reality TV” seems to portray lavish and silly as something that could happen to you, if you could just think of a plot line with enough drama to get the TV folks and sponsors interested.*  This makes people think they are just one lucky break or lottery ticket away from the good life, but they don’t ever consider that even if they had “the good life” they would still be themselves.

No matter how much we try, we can’t outrun ourselves and our own inherent problems and weaknesses.  We are who we are, and the greater the disconnect between our real selves and the public version of ourselves, the more likely we are to face a crisis point. You don’t need me to point out examples of that- pick up any newspaper and read about the latest public figure who has had a comeuppance or the people who bought too much house and ended up in foreclosure as a result.

Here’s the take home message: The more I wish to obtain something or become something, the more I need to construct the reality of my life to support that move to a different space.  For example, I’m not going to lose weight if I don’t exercise and eat better, and construct my life and habits to help make those changes a sustainable reality.  Otherwise, I’m just going to continue on with the status quo, while my dreams of being a size 8 remain just that, ethereal dreams with no grounding in reality.   (I may secretly hope that I have in inverse Dorian Gray problem, where the outside is getting older, but the inner portrait is twenty-two and sculpted… but I digress.)

When your internal and external reality are pretty well matched, life is simple.  You are in What You See Is What You Get (WYSIWYG) land, and there’s no need to be something more or different that who you are.  It’s a place of acceptance and responsibility, and while it may not be as exciting as jetting off to Cannes, it’s less stressful and more sustainable in exchange.  And that’s nothing to sneeze at.

*However, I doubt the producers will ever show up to “Greenwood PTO 19317” to see how the moms in this community work to bring people together and help improve our schools, because we’re all simply normal, hard working folks.  Where will they get a full season of TV worthy drama in episodes entitled “Are we going to be able to get a one to one laptop program going or not?” and “Running the Book Fair is like chasing cats” that will keep sponsors and audiences coming back season after season?  Then again, if it solved our school district’s funding problems and improved my kid’s experience at school, I’d sign up in a minute.