From the Other Side of the Pond

We’ve just gotten back from a two week trip to Europe.  We visited Spain, Italy and France, and while I’ll be the first to admit we had mostly a tourist’s view rather than an insider’s view of what’s going on, I thought I’d share a few observations:

1. Community is Important. No matter where we went, you could see that community spaces, ranging from parks to gardens to public squares, are a much greater part of the infrastructure across Europe than in the US.  For example, if you walk through Madrid or Barcelona, you find small parks and open spaces (along with larger ones as well) containing maybe a few benches and often playground equipment, encouraging families to stop, play a few minutes and move on.  While we saw more than a few of these integrated green spaces also being used by the poor and homeless as resting places and even saw one guy washing his clothes using a public water fountain, I was struck by how important the public squares and spaces are in Europe, and how few of these same, low tech community builders are present in the US. 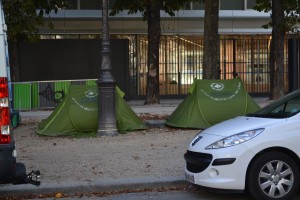 Tents on the Street in Paris

2. Homelessness is a problem there, too.

As much as we decry things like having a social safety net here, and critique other “socialist” countries for the choices they make, European countries, on the whole,  have greater income equality– having less of a gap between the the average income earner and the poor, than in the US.  But this still hasn’t solved the problems of homelessness, or the toll the economic upheaval is taking in terms of jobs and security for folks.  I was surprised by the amount of homelessness we saw in Paris and in Spain, and while I’m not sure how to quantify it, it seems a bit more visible than I’ve seen in prior years, and is easily equal to that I see in Philadelphia.

3. Protests in Spain.  When we were in Madrid, many of the tourist buses weren’t running, because they were avoiding the Placa del Sol- the area in which many protests were occurring.  The unemployment problems are clear, and even in the tourist areas there was a lot of pan handling.  Likewise, in Barcelona, there seemed to be great crowds of young people, holding signs and having large sit-ins in the public squares- some of these seemed to be geared towards the Pope’s upcoming visit to Spain this week, and others seemed to be more politically motivated, but I didn’t get a good chance to speak to a lot of folks about this because of the language gap.  Our ship actually detoured away from the island of Mallorca because the transport workers were planning a strike, and ended up spending an extra day in Barcelona as a result.  There seems to be a lot of unrest in Spain, and it’s clearly the middle and lower classes are hurting, but there seems to be no answer in sight for how to solve these chronic problems.

4. The Integration of New and Old

In the US, we have about two hundred and fifty years of history as a nation, and a bit more going back to colonial and native american history.  When we decide to build something, we often have the luxury of starting fresh.  In countries like Spain and France, for example, they have monuments going back before the Middle Ages, and in Italy, to at least 300 BC if not earlier.  Spain and France seem to have done a great job in preserving their history while adding on new over the years- the old and the new seem to work together well as things have changed over time.  There is a reverence for history, but they do not seem hamstrung by it.

Italy, however, has so many ancient ruins, as well as important historical churches, monuments, art and more, that they seem to be almost bound and restricted by it.  One tour guide told us that the rules in Italy require  that whenever you dig in the ground, if you find a piece of travertine marble, you are required to stop and have a state archeologist come take a look to make sure you haven’t stumbled upon an important historical find.  This not only makes the act of planting a tomato garden difficult, but it’s made expanding the metro system in Rome almost impossible, since Rome is a city built and rebuilt upon itself almost ad nauseum over time.   The importance of history and the treasures in Italy almost constrain many parts of it from modernizing, making Italy both incredibly charming, but also seemingly out of date at the same time.

What This Means for Us

I think we have a sense of entitlement and the ability to build anything new, in part because of the vast space we have available, and that we are not handcuffed by centuries of history in the same way Europe can be. But as a result, I think we also lack a sense of craftsmanship and artistry that Europeans see every day surrounding them.  When you look at churches and artwork that are centuries old, some of which were built over many lifetimes, and all of that work was done by hand by skilled craftsmen, it seems all the more amazing .  We take so much for graned here in the newness of it all, and have much less appreciation for the effort, skills and training it requires to be really good at something. 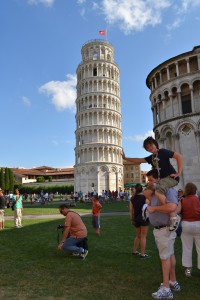 The Obligatory "prop up the Tower" picture 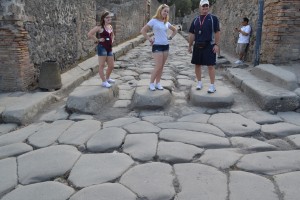 Designed for Chariots and Water Management... 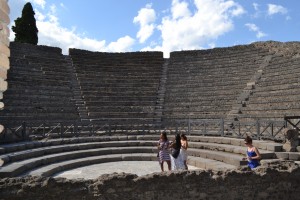 When I look at things like the Leaning Tower of Pisa, or the ancient streets of Pompeii,  and how much engineering went into these cities- and how all of it was done without any modern tools at all- it’s hard not to feel lazy and privileged.  Even in the souvenirs that consist of local specialities have a sense of artistry built in that I don’t see as often in the US.

It makes me wonder if in the hurry to secure ourselves and our future, and grab as much as we can, almost like hoarding resources at every opportunity, we may be losing things that will endure over time.  For example, it seems unlikely that we’re going to be leaving the same sort of artifacts that will endure for centuries the way the Romans have.  They are still digging marble out of the same mountains that Da Vinci and Michelangelo got their blocks of marble from, yet what are we doing to make sure our lives have meaning centuries from now?

Craftsmanship and expertise takes time, and I think we’re losing a sense of that in our rush to do things easier and faster.  Technology makes many things easier- but we seem to be losing a sense of importance in the process.  Take this picture of the amphitheater in Pompeii.  It was created so that water would run underneath the stage area, creating a natural amplification of sound- pretty amazing actually.  I’m not sure we’re going to be looking at many of our current stadiums in the next 100 years, with the same sense of awe for the workmanship that went into creating that churro stand.  The sense of common community purpose and creating community space was vital in a world where most of the group communication and civic life took place in these large gathering areas rather than by phone or text.  But I have to ask- what have we lost in the process, now that so much of our communication is no longer face to face ?  Do we maintain that same sense of common purpose, or do we look at everyone beyond our own circle of friends and families as the “barbarian” trying to take our resources from us?  Do we have that same sense of national purpose, community pride and achievement if you never get the same chance to experience the completed monument?  Have we constructed a federal government that is so distanced from the people in many parts of the Country that they do not feel or connect to the sense of a greater Nation where we all work together and make sacrifices for the greater good of our country and community?

These are kind of big, esoteric questions.  I don’t know the answer. But I do worry that we don’t do enough to make everyone feel included and proud of our nation as a whole, and have a sense of mutual responsibility that was clearly essential in order for something like Pompeii or Notre Dame or even Gaudi’s grand church in Barcelona to be built and maintained over the centuries.

What will be our legacy? What do you think? What will we leave behind that we can be proud of for our grandchildren, and how can we start to come together to have a common sense of purpose again, whether that’s locally or nationally?