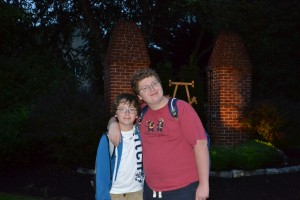 My youngest child is in his last year of Middle School.  He’s on that bubble between childhood and adulthood, where the push-pull between independence and the security of Mom and Dad is most acute.  I’ve often felt my job is largely to provide a little guidance from the side but to let him experiment a bit, and make mistakes while it’s still safe to do so.

This American Life had a great show this past week on Middle School. You can get it from the This American Life website, or click on the player below. It’s a great episode that describes not only all the physical, mental and emotional changes kids go through, but how they start to really become themselves during this period. They talk to middle schoolers at dances (including a dance in Lewes, Delaware) and it’s exactly what I observe chaperoning middle school dances as well- kids trying on different social relationships and expectations, and trying to figure out where they fit in the big picture.

When I teach an after school program we call “KMS Radio”, trying to teach podcasting to middle school kids after school, I typically have a class of 6 to 8 kids. I’ve tried to get them to think about making their own radio show, even story-boarding a project we can complete over time. The first few groups loved this, and they did video game reviews, little news programs, and the like, much more like standard morning radio fare. Later classes wanted to make their own movies more, although often they didn’t have the patience to plan it out in advance. (Although I have some great video of a “real world” angry birds video that we shot a few weeks ago…)

So this session, I decided to try something I had tried once before, and use a “This American Life” type format. After the storyboarding and planning out a “show” fell a bit flat, we started having the kids interview each other, on digital recorders and on video about what they think about teachers, school, and their whole experience. For some, it seems like the first time anyone has ever asked for their viewpoint on things. They love seeing themselves on video, and using the iPad to shoot video as well.

My experience with young middle schoolers is very much like that you hear on the This American Life episode. They are full of ideas, bold but shy at the same time. They are testing their limits of comfort, and trying to find themselves. I was particularly intrigued by one boy who was almost painfully shy, but loved being behind the camera, or composing music, but seemed to be afraid to get into the mix as much. (With a few really exuberant girls in the group, I was lucky to get a word in edgewise as well, so I get that completely.) But I wonder what he’s thinking and what Middle school is like for him. He’s a pleasant and smiley kid, and I just would love to know what’s really going on beneath the surface, not that I have any real right to know, but he makes me curious.

Middle school, as a transition time not only in the lives of kids, but in the times we all live in, seems like a microcosm reflecting this change. Education and educational technology is changing the way schools teach, and tech is likewise changing the social lives and leisure time of these kids as well. They’re fascinated by even getting to touch an iPad just to explore it- I could do a whole course that involved letting kids mess around with iPads for an hour once a week, and they would be thrilled. They’re on the cusp of exploring the world, exploring their selves, and the power they have to make change.

It seems weird to think of middle schoolers as larval adults, but they are going through that metamorphosis that will continue, at a lesser pace of change, throughout high school. This proto-adult they are forming will be the foundation of who they’ll be in the future. For some, this will be the best part of their lives, and for others, it will be the most awkward. But it’s kind of exciting to watch it happen, and to get a glimpse of kids experimenting with versions of themselves and who they want to be. For that reason alone, I’ll be truly sorry to be “aging out” of having middle schoolers by the end of the school year.