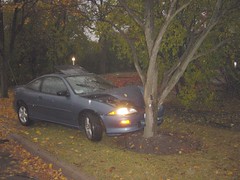 Originally uploaded by I Bird 2

It’s being reported that Commerce Secretary John Bryson got into two car accidents after suffering seizures while driving in California. While I expect there will be significant amounts of political hay people will try to make out of this, I thought I’d share an experience we had with this about 6-7 months ago.

We had just come home from lunch out with my family, and came across a vehicle stopped in the middle of a busy road near our home, with a man talking to the passenger. We drove into our driveway, and thought we might go see what was up, but instead, my husband heard a big crash. It turned out the car that had been stopped turned onto the small road near our home and drove into some trees lining our backyard. We came running along with neighbors, and found a woman in the car, barely conscious. The airbags had gone off. We called the police and ambulance. In the meantime, my husband (a doctor) had my sons go and get blankets, and they gently removed the woman from the car to stabilize her while waiting for the emergency response folks. We found her purse with her driver’s license, and I went in the house to see if I could find any information about her online and potentially any relatives, since they were taking her, unconscious and seizing, to the local hospital, along with her belongings. I found her Facebook page, found out she was married, and tracked down her home phone and called her husband to let him know what had happened and where she was headed. (Still before the State Troopers arrived at the scene). It turned out that yes, she had been having night seizures, but had never had any during the day until this point in time, where she ended up totaling the car, a little landscaping, but luckily did not crash into anyone or anything on what was a 4-5 mile trip, we later found out, that she does not remember at all.

So needless to say, when I first heard of Secretary Bryson’s accident, I thought maybe that could be the case for him as well, and sounds like it is. The bottom line of all of this is that if you see someone acting weird driving or after a crash, take away the keys until help arrives. They may be in the middle of a potentially more serious medical situation than they even realize. Secondly, if you are having any sort of seizures, you should not be driving unless it is under control totally, whether they are happening during the day or night, because seizures are unpredictable and dangerous things. Ego is one thing, the safety of everyone else is another.

My sister has a seizure disorder after a head trauma in a car accident as a teenager. She had to go through long periods of not driving due to seizures, and gets her license temporarily suspended whenever she has breakthrough seizures, just for this reason. Simple things like hormonal fluctuation, dehydration, salt and mineral imbalances and more can lead to breakthrough seizures as well, even when controlled with medication, so being very careful about your health is important as well.

I hope Secretary Bryson is okay, and the people that were in the cars he hit are likewise okay. But I hope rather than political hay, we learn instead more about seizures, seizure disorders, and making sure that people drive safely, or do what is necessary to have others transport them if they have seizure issues. It’s very scary to think that anyone on the road at any time could have this problem, but if you do run into someone who seems out of it, letting them back behind the wheel is the most dangerous thing of all, as we learned with the BMW in our backyard, and Secretary Bryson learned yesterday.