Tales from the Road 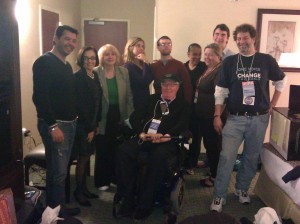 On Election Day, I worked as a Poll Attorney.  Here in PA, we have a new Voter ID law that was repealed in part, but left many with misinformation and confusion about what needed to be done to properly identify people in the registered voter list.  I started the day in one area, and ended up moving to a second polling place, when concerns were raised over voter intimidation.

At both polling places, Voter turnout was heavy and very early on surpassed the turnout in the Election two years ago.   This increased number of voters meant the poll workers had to keep things moving, and keep the entries as accurate as possible.  There were also plenty of poll watchers from both parties present, to make sure people were getting through, and to keep lists so they could make calls later in the day to help get out the vote as needed.  My job was to make sure people could cast their ballots, sort out any voter registration issues if we could, or ID issues, and make sure everyone was clear on the voter ID rules.  While I think people were a little taken aback by having a lawyer present and that spelled trouble, soon everyone calmed down, got back to work, and understood this was just to make sure everyone followed the confusing rules.

Despite the fact that voters did not have to show ID, many chose to.  Some said – “You can ask, but I am NOT showing it to you.  I have it, but I don’t have to show it.”  Clearly, this law had caused some pretty intense feelings with voters of all stripes.  Some, including first time voters, needed to show ID because they had not yet signed the voter registry, but what type of ID was acceptable was in question, and I had to sort out one or two cases, to prevent these young voters from having to cast provisional rather than standard ballots.  One young lady had to go back to her car and retrieve a basic form of ID- a pay stub- but we saw her come back and cast her ballot, meaning this did not dissuade her from voting- a very good thing.

At the precinct that had a report of a problem, it was a very small polling place, with 945 people on the rolls.  The man working at the door, making sure people knew where to line up and the like, was a big guy, who later reported to me that he weighed 350.  Several people asked him if he was a bouncer, and he looked like he could have been one outside of election day.  At first, he had on a black vest, that looked more like a military flak jacket/bullet proof vest than anything else, and cast a long shadow, especially since most of the other poll workers were middle age to elderly women, and not particularly big or menacing under any circumstance.  The guy at the door (K) was asking people to have their ID ready, and this caused a stir when a minority voter complained that it wasn’t required and started getting nasty, which set off a series of reactions that were anything but constructive.

When I showed up, things were under control, and I said I was just there to observe.  Folks were a bit defensive at first, and wanted to know why the lawyer was there,  I said I just need to hang out, and everything was fine.  After a few minutes as voters passed through, I asked K to change what he was saying just a bit.  Instead of “Have your ID ready” if he could say “If you are going to show ID, please have it out to make sure the line goes quickly” that was ok.  Instead of making it seem mandatory, he could make it seem optional.  We spoke about how the optics were important, and while it certainly wasn’t his fault he was a big guy, for some folks, having a big guy by the door asking for ID could seem intimidating or improper, especially since ID was not required.

As time went on, we had a long discussion about the voter ID law in general.  Where he started out believing it was just the right thing, and “Dead people have voted”, I explained to him that absentee ballots often meant someone could vote in advance and then go out of town, have a car accident and die in advance of election day, and still have his vote count.  This then seemed to make sense to him about how dead people could vote.  Or, I said, someone could fill out Grandma’s absentee ballot, even if she died after receiving it, as a last act.  He understood how this seemed possible as well.  But both cases were going to be small and largely insignificant in the long run.  We then spoke about whether insisting everyone have ID on them at all times was fair- and that I for one, did not want to live in the Country where someone could ask for my papers when and where they wanted to, or having to show ID when crossing the border into a new State- this was the United States, and States were to work together, not function as individual countries.  This also seemed to make sense.  In the end, I think the discussion was productive, each of us saw the others position and valued it, tempers were calmed, and everyone just got on with the business at hand.  In fact, after time, K first unzipped his vest and then took it off, making the whole optics at the door even better and much friendlier, which would have been a great way to start the day.

While I had strong opinions about the election, my biggest concern was that everyone got a chance to vote, and the rules about Voter ID and requirements were followed.  I think I helped at least a little to make that happen.  And I learned a lot about how the poll workers are an important linch pin in our democracy, ensuring the vote is carried out fairly, and how little details, that may seem insignificant, can have a big impact on how people feel about voting.  The poll workers work hard, for hours, making sure every name is logged, every ballot counted, and every person gets a chance to have their say.  And it’s clear that it’s very easy for small things to slow things down or trip up the system as well.  Even people feeling rushed, under the gun, in trouble, or anything else can affect the perception of the crowd and how the day goes from there on out.

Democracy in action is a great thing to witness.  I really appreciate the opportunity to have done this service, and for talking to people working the polls, voters, observers, and for the opportunity to discuss things like Voter ID with folks who may have, for the first time, seen the issue with a slightly wider perspective.  That felt like a job well done.

Next time we have an election, consider training and working at a polling place.  It will give you a great sense of what democracy means at the ground floor, where the rubber truly meets the road, and give you great hope for the fact we pull this off frequently – just like I am amazed on some level that I can drop a piece of paper in a mailbox with a sticker on it, and it will be delivered anywhere I ask it to be.  We can do great things together, and whether we agree or disagree with the outcome, it should not be, in the end, about Winners and Losers, but about coming together and getting things done for all those folks that braved the cold, worked the polls and put their faith in public officials.