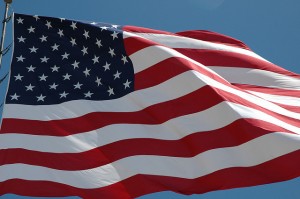 As it does on every July 4th, NPR does a segment where the Declaration of Independence is read out loud, this year by visitors to the National Mall, of all ages and ethnicities.  This year, especially with the current political unrest in Egypt, the Declaration is even more important to think about and understand how remarkable it really was.

Before the Declaration of Independence, the people living in areas of what we refer to as the States were colonies with local governments.  We were essentially outposts of the British Government, that, over the course of a few generations, began to have political differences with the Monarchy and British parliament that did not allow the colonies to have representatives in that body or have any real means of redress for issues with taxation and the like.  Over time, the different colonies began to band together to seek common redress for these grievances.

The Declaration was a pretty bold move, but borne out of frustration.  I love this passage, which reads almost as a “Try as we might, you refused to be reasonable, so we had no choice” clause: (You can get the whole text here)

In every stage of these Oppressions We have Petitioned for Redress in the most humble terms: Our repeated Petitions have been answered only by repeated injury. A Prince whose character is thus marked by every act which may define a Tyrant, is unfit to be the ruler of a free people.

Nor have We been wanting in attentions to our Brittish brethren. We have warned them from time to time of attempts by their legislature to extend an unwarrantable jurisdiction over us. We have reminded them of the circumstances of our emigration and settlement here. We have appealed to their native justice and magnanimity, and we have conjured them by the ties of our common kindred to disavow these usurpations, which, would inevitably interrupt our connections and correspondence. They too have been deaf to the voice of justice and of consanguinity. We must, therefore, acquiesce in the necessity, which denounces our Separation, and hold them, as we hold the rest of mankind, Enemies in War, in Peace Friends.

What would have happened if King George had just allowed a few colonists represented in Parliament? We might be more like Canada.   But instead, we decided to forge our own path.

The use of the word “these united States” in the the Declaration really looked at each State as a sovereign nation-state of sorts.  Until the Constitution was ratified by each State in turn, starting in 1787 with Delaware and continuing through 1791, each State had its own currency and form of Government.  Every state functioned as its own Country, causing all sorts of problems with commerce, exchanging currency at State borders, paying for the Continental Army, and more.  By deciding to come together and form a Federal national government to handle the free flow of people and commerce between the former colonies, and agree on over-arching principals of Government was pretty remarkable, and it worked.

The Civil War, less than a hundred years later, started in part because of this disagreement about the power of the federal Government and the individual governments of the States within their own borders.  It was possible that the US could have been divided into two or more Countries, but instead, we decided to hang together in this great experiment.

It’s amazing how such a variety of people, those whose families have been here for hundreds of years, and those who are recent additions to our Nation have found a place where they can be free.  Freedom means different things to different people, and we still struggle with the boundaries of the individual v. the State v. the Federal Government when it comes to individual liberties versus common good.  I admire people striving for freedom and individual rights, but as we found as a nation, there are times we have to hang together and do what is best for the common good over our own individual best interests.  This coming together has given everything from interstate highways, to a way to care for the very poorest among us, to national power grids, transportation, international trade and more.

I hope this Independence Day, we remember how lucky we are to live in a Country where the redress for complaints is handled peacefully and through the ballot box instead of at the point of a gun.  It’s hard to imagine the military in this Country taking over our Government as it has, at the moment, in Egypt, or what would cause such a thing to happen.  We should remember how lucky we are to have representation, however dysfunctional it may be at times, and that others are not so fortunate.  And we should remember that the wisdom of our forefathers kept this nation together, not once, but twice, and that working together has always led us to success.

The sibling rivalry of States is to be expected.  Sometimes I sympathize with States like Texas flirting with the idea of seceding.  Like teenagers wanting their own sense of independence and freedom, maybe we need to consider letting them have a go.  In the end, I think the States will find that the benefits derived from the family unit- our Nation as a whole- generally outweighs the benefit of starting over from scratch.  It was the lack of compromise and consideration of the needs of the colonies that led to our initial Declaration of Independence.  We still have differences based on regional needs, weather catastrophes, economic differences, infrastructure issues and more, let alone the bigger political issues of the day.    We’re still balancing States Rights and Federal Rights today with issues ranging from abortion to gay rights to taxation.  But I hope we can all read the Declaration of Independence at least once a year, and remember why we came together and how truly amazing it is we’ve kept this amazing melting pot of diverse humanity together for all this time.

May it ever be so.