Infrastructure in an interesting word and concept.  It is the bones, or framework around which we build everything from ideas to a house, to our larger communities, and our Country as a whole.  Without a solid foundation, we can’t build a larger structure on top that will withstand the test of time.

My son developed idiopathic scoliosis, and needed to have surgery this summer to straighten his spine, to prevent a whole host of serious problems that could occur if his “infrastructure” was not corrected.  In a mere month, he ended growing almost 2 inches taller due to the straightening, and was able to get back to school full time, on time.  There was a period of pain and, of course, worry, about outcomes, and how he would recover, but the pain ended up being temporary, and the end results phenomenal.

When we talk about our State’s infrastructure, we also need to go through temporary pain to get it corrected, and every time we put off the work, the project gets bigger and more expensive.  For example, PennDOT has been working to fix the problems locally on Rt. 322 for years, and my opponent even held a whole series of hearing on its repair and expansion in the early 2000’s.  Now it’s 2014.  My opponent keeps voting against the Transportation bill, but he’s certain that PennDOT will keep the project as a priority and on track.  The evidence shows that the project was originally slated to begin around 2008, and is now scheduled to start, at the earliest, 2016 or 2017.  Yet the development in our local townships continues, which will only make the congestion and traffic worse in the meantime, slowing the overall growth of the area.

I also believe that our largest and most important infrastructure spending is our investment in our public schools.  While some people like to look at education as a business, it is not a perfectly competitive marketplace, the same way hospitals and health care are not perfectly competitive.   We have a service that is tied to our community and serves everyone, regardless of ability to pay, and regardless of ability or disability.  Where private schools set admissions standards, and can pick or choose their students, our public schools have made a promise to our whole community that our children will receive an education that will prepare them either to start a career or continue on and further their education.

When we talk about vouchers and charter schools, we are abdicating our responsibility to all of our children, and deciding just to slice off a piece of the pie, and treat that part separately, often trying to make a profit from it as well.  It’s not unlike UPS taking package delivery business away from the Post Office.  There probably is room for some enhanced service, and you pay extra for that, but the main service needs to remain to meet the needs of the whole community, regardless of the health or lack thereof of a private business.  If UPS or a charter school goes out of business, there is still a safety net there – the infrastructure we all pay for and benefit from, even if you, personally, only use it as an insurance policy. 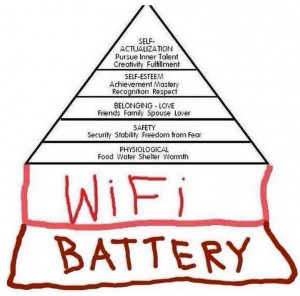 And then there is our digital infrastructure. Google has been working with several cities to provide “gigabit” (read: very, very fast) fiber service, up to 100 times faster than current internet speeds.  We also have ongoing conversations nationally about municipal wifi and whether connection to the internet is rapidly becoming an infrastructure and social justice issue, as access to many governmental services moves online and out of the world of paper forms (much to the relief of many).

I have run “geek” conferences, where we may have as many as three hundred people all trying to get on and use a wifi hot point at the same time.  This causes access to the internet to slow dramatically, if not crash entirely.  People get frustrated and angry, because we are starting to expect not only access to the internet, but quick and easy access, almost everywhere we go.  In public, people often have apps to search for open wifi connections they can use for free, even if security concerns might exist with these open networks.  This picture of wifi and battery charging becoming the new base of Maslow’s hierarchy is not far off.  More people got upset and frustrated during recent electrical outages because their connection to the outside world depended almost solely on the battery life of their internet connected devices- not on whether or not the lights were working.

When we talk about letting kids bring their own devices to school, or providing computers or tablets to all students, we have to understand that there’s an infrastructure cost associated with this expansion.  We will need added wifi capacity (bandwidth) as well as reliable and quick connection speeds, to make sure more class time is spent productively, rather than waiting for a webpage to load.  This will require additional expenditures and investments, and they will need to be upgraded as technology develops.  But I feel very confident in saying we have safely passed the time where we can wait for better technology to come around.  We need to make sure our children, and our schools, at bare minimum, have access to the digital infrastructure they need in order to ensure we are graduating students ready for the demands of the 21st Century.  We also need to think about whether provding community broadband is becoming the equivalent of having good roads- especially as more and more people work from a place other than the office.

Keeping our infrastructure in good repair- whether it’s roads, bridges, schools, or digital infrastructure- is a governmental responsibility and one we need to do a much better job of taking seriously.  That’s why I am running for office this year, and why I would love your support.