Nine Things My Dog has in Common with Donald Trump 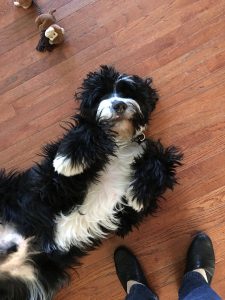 My husband and I took the dog for a walk this afternoon, and we started thinking about how much our furry kid had in common with The Donald.

Both require a handler (or two.) Darwin is 18 months old – a Bernedoodle- and weighs north of 85 pounds, so controlling him can be a challenge, especially with outsized enthusiasm.  It seems he and Donald require handlers most of the time rather than running free,otherwise, who knows who they might bowl over? 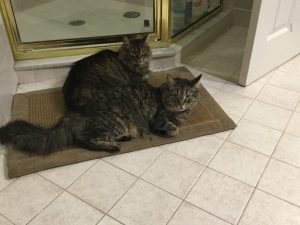 Both seem to enjoy chasing pussy (cats). Our two maine coon cats certainly hold their own and basically give the bouncy boy a run for his money.  He always seems playful, but the cats much prefer staying out of reach, much like many women in Donald’s sphere.

Both look for a surprise advantage, without thinking of the consequences.  In the case of the dog, it’s taking advantage of food left too close to the edge of the counter, never considering the consequences of this, even when he has a training collar on.  Remind you of anyone?

Both are Surprised They’ve Done Anything Wrong. Darwin will give you a look that says “Huh?  That wasn’t ok?  Since when?  I never got that memo!” Also sound too familiar when thinking of Donald.

Both Can Be Single-Minded in their Pursuits. At least when Darwin decides he’s going to chase a squirrel or eat the cat food, the consequences don’t have international fallout.

Both Look a Little Guilty for a Few Minutes, But Then, It’s All Over- For Them.  At least when a dog misbehaves, he can get over it- but it still makes us rethink our strategies for everything from storage of shoes to where we keep the dog treats. Donald likewise leaves wreckage in his wake, but similarly does not seem to care or remember it’s even happened.

We continually Hope Both will Grow Up.  Having a big dog means understanding that he will be a rambunctious puppy, but that it’s imperative to train him and help him learn manners. We know age will help calm darwin down a bit, but at 70, when will Donald finally grow up?

Both seem immune to Consequences- from time to time- and we make excuses for them.  At least when Darwin was a puppy, if he peed on the run, it was sort of expected, and we understood this was part of being a dog. I’ve seen people tying themselves in knots trying to explain Mr. Trump’s behavior- and frankly, my excuses for the dog, as a puppy, were more convincing. 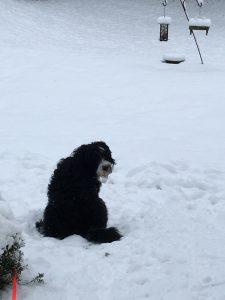 We hope their behavior will improve with experience and training- but sometimes, it doesn’t seem to stick.  We had to get a trainer and a training collar to help Darwin learn all the rules- a little shock can do wonders- but sometimes, he decides he just doesn’t want to listen, regardless of the consequences.  Trump likewise seems to go off and chase his own version of squirrels, even if his advisors have told him how wrong this is.

In the end, someone will still love him, no matter how bad he’s been.  I hate to admit it, but even after Darwin chewed my favorite shoes, I was mad for a while, but I forgave him. No matter what Trump does, there will always be some people who will love him and make excuses for him, no matter how egregious the behavior.

I just hope we’re smart enough to elect someone with a better and more consistent character than my 18 mo old Bernedoodle.