Consumer Spending and the Economy 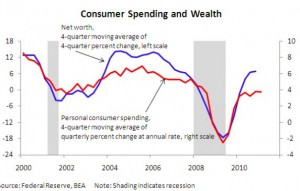 From the Econ and Statistics Administration of the US Dept. of Commerce

I was with my trainer this morning, and we were discussing post-holiday things, as is typical the first week in January.  And I was struck by the following thought:

We got ourselves out of the Great Depression by an expansion of productivity, consumer spending, and eventually World War II.  (I will grant you up front this is probably largely simplified.) I don’t think we can do this again, and looking for consumers to haul us out of the economic doldrums alone without something else, is a mistake.

In this great recession, we’ve initially looked for consumers spending again at previously high levels.  But a series of articles over the past few weeks, have led to me to doubt that that will happen, in part, because we don’t “need” as much as we have in the past.

Look at the Chart above from the US. Department of Commerce.  Despite an increase in net worth, consumer spending is flat-lining at a decent, but not overwhelming rate.  Is it possible that we simply no longer need any more stuff?

Hear me out for a minute.  After the Great Depression, there was a vast input of new consumer devices that helped make the average person’s life more productive.  Think of everything from telephones to dishwashers to washers and dryers.  Think Refrigerators, TV’s, VCR’s and more.  Even computers, cell phones and the like have helped drive consumer spending.  But this year, as I did my holiday shopping, my family had much less on their want and need list than ever before.  We’re pretty much saturated with stuff, and we’re starting to move into the “let’s spend money on experiences” – ie. go someplace or do something together, rather than add to our inventory.

Sure, there’s replacement of old stuff.  There’s some upgrades to our older stuff as well.  But there’s not a lot of earth shattering upgrades that fundamentally alter functionality or time or anything else that we really need.  I may not be typical, I grant you.  We also tend to be a geeky household with more technology than is perhaps decent and seemly. But even as a self-proclaimed member of the technorati, I haven’t bothered to upgrade to 3D TV or Blu-ray because I don’t see the point, really.

Even the nifty stuff we did buy this year are niche products like coffee joulies, and we’re waiting for our Touchfire keyboard.  My husband thinks the Nest thermostat is something he wants.  But these products are what I certainly would call niche and weird.  Seth Godin has about a jillion blog posts that hit this subject matter, including his great book, We Are All Weird.  It comes down to innovations and opportunities being smaller and at the margins, but doable, and profitable for those willing to take the risk.  It’s not about the mass, vanilla middle anymore, and it may not be about making mass companies to produce mass products either.

I grew up in Rochester New York, which incubated some pretty awesome companies over time.  Kodak.  Xerox.  Bausch and Lomb. Stromberg- Carlson. (makers of Telephones and PBX systems).  It was a town where folks would grow up, get a job at one of the big businesses in town and be set for life.  A manufacturing town, and middle America in many ways.  Many of these companies have moved out of town, or in he process of the big wind-down, as Kodak is dismantling many of their plants because it’s cheaper than selling them off.  And the word on the street is that Kodak let many great ideas sit on the shelf, like Xerox did with its PARC lab, letting other companies with a greater appetite for risk take these great ideas and develop them into whole industries.  (You could argue that Apple alone helped usher in the decline in local print shops with development of fonts, and accompanying laser printers, making desktop publishing a reality, and programs like iPhoto along with digital cameras make printing photos less relevant than ever before, issuing an end to Kodachrome…but I digress.)

The point here is that we have plenty of ideas and even plenty of nifty products, but the end of the mass and the production for the mass market is coming to a plateau.  And as such, I’m not sure we’re going to be able to rely on consumer spending to drag us out of the recession.  It’s going to be small businesses, entrepreneurs, and the like, who now have as much access to consumers all over the world as never before, that will be our new engine of productivity.

I could be wrong of course, but I know I don’t have an un-ending need for new washers, dryers, or other large consumer products, because my current ones work just fine, and the upgrades are not enough to convince me to replace early.    As a result, I’m just not sure where the big consumer demand is going to be to drive our economy forward.  I think the new normal will be relatively flat spending and slow growth, and we should prepare for that reality.

Why Best Buy is Going Out of Business…Gradually Forbes.com

Americans Plan to Spend the Same on Christmas (look at the trend lines…) Gallup.com

12 Crucial Consumer Trends for 2012 (many include “recycling”) Trendwatching.com